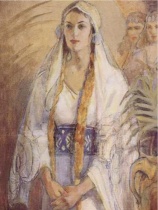 Recently I pondered whether delving into the Old Testament Torah would help bring about some understanding to Calvinistic/sovereign grace issues within my own faith. Unbeknownst to me, my bride has been studying the book Esther in a women’s Bible study. She’s well aware of my consternation regarding Reformed theology in general and unconditional election in particular. She believes a sovereign God can, and does, direct the events in the lives of believers – and for that matter, non-believers as well. With her permission, I have copied her summary of the book of Esther and how this book has helped to bring about a new sense of purpose and understanding within her own life.

Can everything that happens in the book of Esther be explained by naturally-occurring events?

Is it all just happenstance? It seems impossible that all of those events, taken together,  could randomly have lined up that way. It appears that everything was orchestrated and planned out. And none of the players could possibly have seen, understood or even imagined that each event had been specifically designed.

Is there a lesson for us? Does God work this way in our lives? How do we know if God orchestrates circumstances in our lives today? The book of Esther teaches that God can use people to bring about events he desires – even through people who don’t acknowledge or worship him. The book of Esther also shows God’s heart and compassion for his people. God has good intentions toward us and the power to orchestrate human events in our favor. I believe God has the power to answer my prayers, the power to influence my mind and help me make wise decisions.

Did God orchestrate the approval process at Hamline so that I would enter their education program? Does God specifically want me to be a reading teacher? I still can’t answer these questions with 100% assurance. However, I think it’s much easier looking back over time at events to see a plan and that’s why it’s so evident in the book of Esther that there was a plan. We are looking back over time. No one in the story saw the plan as it was unfolding. The book of Esther teaches that God sees and cares and works on behalf of his people. May we trust in God’s good intentions and his providence over our lives.

Romans 8:38-39 states, “For I am convinced that neither death nor life, neither angels nor demons, neither the present nor the future, nor any powers, neither height nor depth, nor anything else in all creation, will be able to separate us from the love of God that is in Christ Jesus our Lord.”

I’m not sure it really means anything, per se, but I find it interesting that I’ve never come across any Calvinistic reference pertaining to God exercising his sovereignty within the Book of Esther. Still, it’s hard to argue against the “lessons” of Esther that my better 7/8ths elaborated on in her journal. And, it’s hard to argue against those passages in scripture in which God takes an active role or against those individuals specifically called out by God – including Moses, Abraham, David, the disciples, Paul, et al. I don’t doubt that God, being God, can do as he pleases. That said, I’m not a “determinist” and as such am not convinced that God directs the actions and activities of each and every “free agent” (a philosophical term I seem to be coming across more often). Nevertheless, perhaps it is only through the long lens of time that we can understand the path on which we’ve walked and how all that we have encountered on that path has indeed, per Rom 8:28, worked together for the good of those who love God and have been called according to his purpose.