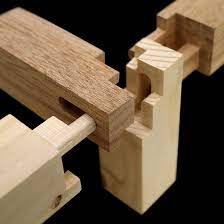 Of late, I’ve been trying to come up with an analogy to express why God may not be as intimately involved with his creation as many would like to believe. The other day as I was working with a table saw cutting some dados on a piece of wood – it hit! To which, I sense that the interaction of God and his creation is similar to that of a woodworker. Consider, the woodworker has created a beautiful table. A lot of time, effort, expense and care has gone into crafting that table. Out of “nothing,” the woodworker planted a tree, Years later the woodworker harvested that tree and cut it into planks. Eventually the woodworker cut those planks into something more manageable. With great care and precision, the woodworker then dimensions the lumber, squares-up and cuts all the pieces into their final dimensions. Complex joints are exquisitely fashioned and perfectly formed. Everything is then carefully fitted and glued together. Some sanding removes minor imperfections. The surfaces are prepared for finishing and when the finish is applied, the luster of the wood grain reveals the true beauty of the table.

The woodworker is well pleased with his creation and places his table in a prominent place. Everyone who sees the table is in awe and admires the skill of the woodworker. The woodworker daily dusts and polishes his masterpiece. Nothing is allowed to ruin or otherwise lessen the table’s beauty. However, over time, little by little, the woodworker seems to lose interest in his creation. Other tasks and projects come up. Children, and eventually grandchildren, occasionally bump into the table. Kids love to climb on the table, make “forts” with it and all too often spill milk and leave sticky substances on the surfaces. Crayons and other marking implements don’t always stay on the intended page. Dents and scratches seem to appear from nowhere. Without realizing it, people using the table no longer appreciate its beauty and intrinsic value. The table has become something on which to pile stuff. And before long, the woodworker tires of constantly having clean and otherwise remove dirt and debris from his masterpiece.

Further, the woodworker, being a creative type, has gone on and crafted other tables and even more intricate pieces of furniture. Once in a while the woodworker may dust and polish the table to bring back some of the original shine and luster. Over time, however, the table develops a bit of a “wobble” as the joints have loosened up. There are numerous dents and dings as the table has endured much use. A crack has formed on the top from constant changes in temperature and humidity. The woodworker looks at his creation fondly and recalls the joy he experienced building the table. The woodworker has been delighted to see the table put to good use over the years. Many have appreciated the table over the course of time. But alas, the table no longer projects the majesty and prominence it once held in the heart of the woodworker. The table remains in its place. The woodworker now routinely walks past it without taking notice. The table is typically covered with piles of papers, magazines and unread mail, crossword puzzles, a pencil holder and a portable radio. A couple of TV clickers also reside. Also present are remains of someone’s dinner from the previous night along with the unmistakable odor from a cat who “marked” the table for himself.

The woodworker cleans off all the mess and applies a chemical to eliminate the smell of cat urine. He sees the complete piece and recalls the time, effort and the joy of making this table. Though the table remains in place and is very much functional, it doesn’t hold the luster and the allure that it once did.

As I see it, too many people pray for things and otherwise believe that “God is in control” without actually knowing whether prayers have been answered or if the outcome of a situation or event was just the normal occurrence that would have happened anyway. This analogy, I believe, reflects the interest that God had at one time with his creation. However, even after having made the ultimate sacrifice of giving himself for the sake of his creation, it just seems as though God’s interest in his creation has waned and that he’s no longer involved as he used to be.